I’ve never met Kathy Mayer, but we have the Toledo Fire Department in common.

In 1984, she was one of the first women firefighters to join the fire department, where my Dad had been a fire chief until the late 1970’s. 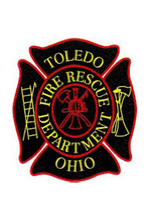 According to a recent article in the Toledo Blade, Mayer is retiring after 28 years. Whether she meant to or not, she broke barriers, and she has much to be proud of.

In the early 1980’s, firefighters worked 24 hours on and 48 hours off. Firehouses were a men’s club—the men slept dormitory-style and there was one bathroom. I don’t know what accommodations were made for women firefighters when they came on the department.

From what I know about fire department culture, I’m pretty sure that in the early years, she and the other women put up with a lot of guff and practical jokes at the very least and outright hostility at the worst. And it wasn’t just the firefighters who resisted women firefighters—some of their wives also worried about their presence. Would living in close quarters lead to affairs? During a fire, would their husbands have the same backup from a woman as they would from a man? Although I count myself as a feminist, I think those were legitimate concerns.

However, the women had to pass the same physical tests as the men: rolling a fire hose (heavier than you think, especially with the metal couplings), pounding a sledgehammer on a target more than 50 times, climbing several flights of stairs in firefighting gear while carrying a hose, and also carrying a 100-pound weight (the assumption was, that if the person being rescued weighed a lot more than that, the firefighter would be expected to call for help).

At first, Dad resisted the idea of women firefighters. Although he retired before that issue came up, he still identified with the fire department. But because my sister and I were in our twenties then, and Margo was interested in being a firefighter, he had to rethink his views. Even though he was skeptical, he didn’t want Margo to be discriminated against. But I suspect he was relieved when she decided not to pursue a career as a firefighter.

Despite the inherent challenges, Kathy Mayer persevered.  She joined the fire department, later became a paramedic, and eventually gained the respect of her coworkers. I give her a lot of credit for making a 28-year career out of the fire department.

Kathy Mayer embodies the vision so many Baby Boom women had when we joined the workforce in the late 1970’s and early 1980’s—women holding their own in nontraditional fields. That is the subject of my memoir-in-progress, Colette’s Legacy.