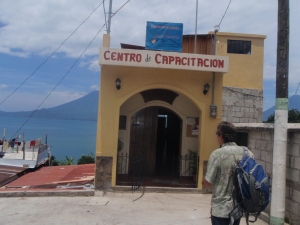 Café Sabor Cruzeno was the result of the CECAP (Centro de Capacitacion) Culinary Arts program of Amigos de Santa Cruz foundation. The goal of the program is to train young people for successful employment in the restaurant and tourist business.

No, it was because I had my doubts that the culinary arts program would be successful with Antonio. I had a suitcase of dried pasta betting on it. Some people might pack extra clothes and shoes to match each outfit. I was more concerned that we have a food supply tucked away. When we traveled to Guatemala in 2010 I had forgotten to pack Crystel’s swimsuit. She ended up swimming in her Hello Kitty pajamas. But, I didn’t forget emergency rations for my son.

Antonio is a healthy ten-year-old. He will eat a salad. Just don’t make a pyramid out of the raw vegetables. Instead, imagine a horizontal sundial and align the fixings uniformly around his plate. No dressing wanted or required. When Antonio and Crystel were in highchairs Jody and I would put food on each tray and what one toddler didn’t eat the other would. Being low maintenance, Crystel’s sundial can be any shape: cylindrical, conical, or vertical with a dab of ranch dressing. She’s satisfied with a ham sandwich. Antonio came to us waving a chicken leg in the air. He has never eaten a sandwich in his life. But give him a Sweet Hawaiian bun in one hand and a slice of salami in the other and he will happily eat them separately.

Our table waiting for us

We cater to Antonio and Crystel because we can, though sometimes I remind him that he was born in Guatemala.  Tamales made of corn and filled with beans are eaten with nearly every meal.

Lee Beal, our guide, originally from Texas, has lived around the world over the years, with Colorado being his home base. His wife, Elaine, and he have been full-time residents of Santa Cruz for the past 5 years. The couple came to Guatemala looking for a simpler and more fulfilling life and found it on Lake Atitlan. Lee originally started working with Amigos de Santa Cruz foundation and now serves on the board of directors. As he learned more about the people of Santa Cruz he realized there was a need for jobs creation. A part of this is now being fulfilled through the CECAP vocational training center.

Walking into the restaurant, I was surprised how open, clean and fresh it was. I felt as if we were on top of a mountain and we were. Two graduates of the culinary arts program were busy in the kitchen completing our authentic Guatemalan meal. They would also be serving us.

I don’t out Antonio unless I have too. Usually I just take him aside and remind him that we have food at home and simply be polite and say, “No thank you” if he doesn’t like what’s served. No funny noises or grotesque looks necessary.

After snapping a picture of our seating area, I took a deep breath and sat down. We had our choice of freshly made cold tea, several sauces, mashed potatoes, and a mixture of glazed vegetables and chicken with pulique sauce. At first glance, there wasn’t anything that I thought Antonio would try. Pulique is a common dish of the Guatemalan highlands. It is often served at holidays, anniversaries, and yearly fairs. Alex, our Guatemalan guide, explained how special it was that our chef had made the pulique for us. (Lee has been employing local guides trained through INGUAT. His goal is to create well-paying jobs that fit with the Mayan culture.) 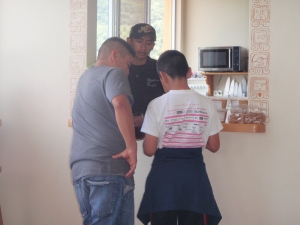 Antonio with Alex paying our bill

The pulique sauce was mild, gentle, and creamy. I watched Antonio as he scraped a bit of it off his chicken.He tried a bite, finished his chicken, and asked for more.

Antonio had proven that CECAP’s culinary arts program was headed for success.

The café is located in the vocational center which houses carpentry, welding, computer education, sewing and weaving. The training center was buzzing with students sewing on Singer sewing machines and students welding on the rooftop.

What makes CECAP unique is that it has always been a community-driven vision and not a government project. Amigos is helping CECAP become self-sufficient.

Touring the vocational education center, watching students sew and weld, and dining at the café were some of the many highlights of our trip. We were getting a glimpse into the future of Santa Cruz la Laguna. Santa Cruz is one of the 45 poorest townships in all of Guatemala with illiteracy and malnutrition among the highest in the country. Amigos believes that education is the key to breaking the cycle of poverty for the indigenous people of Guatemala. Their primary focus has been on education both at the primary and secondary level. We were fortunate to see it at work. 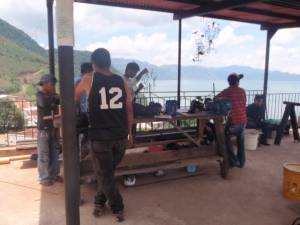 Before we left Minnesota, Crystel had told us that she wanted to learn how to weave while in Guatemala. Lee contacted a local Guatemalan and set up a time for us to meet with her in her home. Both Antonio and Crystel quickly became engaged in learning to weave. They returned to her home several afternoons to complete their projects.

While Antonio and Crystel were weaving, Lee took Jody and me on a tour of the town church and also to Casa Milagro. Casa Milagro (since 1992) is an NGO that supports widows and children. Thilda Zorn, founder and manager of the project, focuses on providing an environment for creativity, joy, and freedom. Jody and I purchased handicrafts that the children had made.

By the time Jody and I returned to our children, Antonio had left with Alex and Zach to play soccer in the village square, and Crystel was making fast friends with the girl of the house.

Antonio rushed in breathless and excited. He was poking fun at Alex and Zach, “Those kids were smaller than me,” he laughed. “We lost 10-7. It cost us 3 quetzales (50 cents).” Apparently, there was a side bet and the local children came away the winners. “Alex, they blew right by you,” Antonio added. “And, Zach he couldn’t stop anything.” 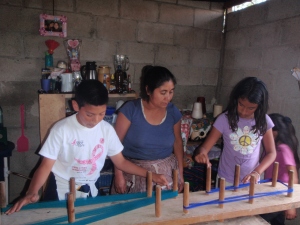 Antonio and Crystel learning to weave

The boy who wouldn’t look at the kids in the square the first night was now facing off with them in a soccer match and for a short time he had two older Guatemalans, Alex and Zach, that could brother him.

This very fine day would finish in a hot tub and swimming pool in the next village, El Jaibalito. A ten-minute launch from Los Elementos.