Periodically, a writers’ group I belong to has a writers’ retreat. This weekend we stayed at The Anderson Center in Red Wing, Minnesota. 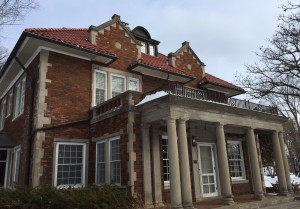 It’s an inspiring place—a stately old home set on acres of land with a sculpture garden on the grounds. There’s a sunny library filled with novels, volumes of poetry, memoirs, histories, and art books. Many were written and contributed by the Center’s guests. In each of the bedrooms, there are journals in which previous visitors (including some well-known writers) commented on their stay. Often they mentioned a breakthrough and expressed gratitude for the Great Things they accomplished . . . which was a bit intimidating.

Contemplative view from my window, minus the other treasure hunter

On Saturday morning, I sat at my desk and stared out the window.

Outside, a young guy in a hoodie and camo pants moved among the trees, sweeping a metal detector across the lawn. He squatted, dug up something with a trowel, then repacked the dirt, and smoothed it out.

What could he possibly have found—a bottle cap? A quarter? The Anderson House is nearly 100 years old. Maybe a long buried artifact had worked its way to the surface.

Inside, I too was treasure hunting. I sifted through files, piles of words, scraps of images, mining my mind for a memory or a line to spark inspiration.

We both worked doggedly at our tasks.

I hoped to uncover an idea that would justify my presence there, so I’d feel worthy of the gift of time.

Quickly I covered up that wasps’ nest of self-doubt and tamped down my frustration. Smoothed over my prickly worries. Don’t be so driven. That’s not how inspiration works.

I reminded myself: Just spend the time. Do the work.