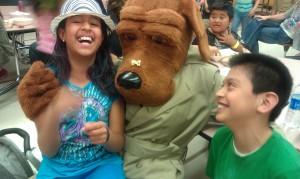 Middle school means I’m just outside of my parent’s reach.

A strong family is in my mind because I want my children in my circle of influence. I don’t want them to make choices that have no do-over.

So, how to keep them close?

A lot of people believe that eating dinner together every evening or even several times a week is vital. That isn’t going to happen in our family. Jody and I often don’t eat dinner in the evening, although we make sure our children and their friends are well fed.

One constant in our life is putting the kids to bed. We take turns with them, as we have since they were infants. This of course, will become less practical as they get older.

I don’t want Antonio and Crystel to be lost in middle and high school like I was. I want them to be able to ask me for help without rebuke and even to bring their friends’ concerns to me if need be. I want to be accessible.

To this end, I’ve done a good job, even though at every school conference this year Jody and I’ve been surprised. The children take turns with who is having ‘issues.’I tell my kids that they couldn’t ever do anything worse than I did in school and that is the truth. The difference is the world is a much more dangerous place and a lot less forgiving than it was 44 years ago.

Having a strong family means having strong relationships within the family. It’s very important to me that Antonio and Crystel are friends. Sometimes, I still remind them that we adopted them together so they would always have each other.

Mondays have become our family Tae Kwon Do day. It is our sit down dinner. Antonio, Crystel, Jody and I are black belts. We have had many meals together the last several years. Our testing day is a banquet.

Once in a while we have game night, and when Amazing Race is on television, we all gather around imagining Mama Beth and Mama Jody as contenders.

Out of all that we do, I think it is our adventures that keep us strong. Doing new and different activities or eating meals in new restaurants. Since I won the Loft Mentor Series, we’ve been attending the readings as a family and eating out at a new restaurant prior to the reading.

And then there are our more adventurous trips which go a long ways toward bonding us as a family—camping in the Boundary Waters, visiting Guatemala, taking a train to Chicago, Mexico, driving to Arkansas, Florida, and cross country skiing in Wisconsin. 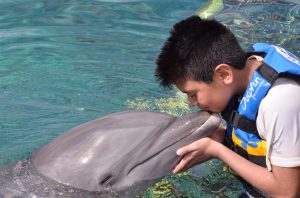 Sharing the above with family and friends also tightens the bond.

A strong family can mean many things. Tonight a strong family means no electronics and no friends over until all MIS (missing homework) on a fifth grader’s conference report are replaced with a grade. 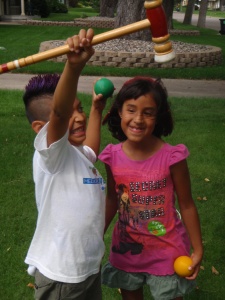 Every week on Sunday, I receive an email alert about new nonfiction titles that are new to Hennepin County Library.That’s how I came to have in my hand the paperback STRAIGHT TALK with YOUR KIDS ABOUT SEX by Josh and Dottie McDowell.

Skimming the book, I stopped at page 127 and read: A young couple that lives near us always asks if there is an older brother in the family where their children have been invited. If there is, they have a family policy that the kids must play at their house, not at the neighbor’s. They also have a policy that no teenage boy will ever babysit their kids. This may seem strict, but it is simply for the safety of their children.

That’s when I knew that I had to write about my experience with teenage boys babysitting our children.

Ten years ago, with intention, Jody and I brought teenage boys into our home and into our lives.

We are lucky to have had teenage boys in charge of and responsible for our children.

Our family unit consists of two women, a boy, a girl, two dogs, two cats, two hamsters, and 10 fish.I can’t imagine the boy and the girl growing up without the experience of having other boys and men in their life. Well, maybe I can imagine, which is why we purposely have uncles that visit them on a regular basis and have had Charlie and Sam as their babysitter.

Though, Crystel has informed us that she is never, ever going to get married, how in the world would she learn to be at ease in the company of men if she didn’t have older males in her life? And, what message would we be sending Antonio about his worth as a male if we align ourselves with the belief that teenage boys are not safe?I agree that men are a different species. Antonio, our son, is one of those species. He needs to know how to navigate with his kind. He isn’t going to gain that knowledge secluded in a house full of women. 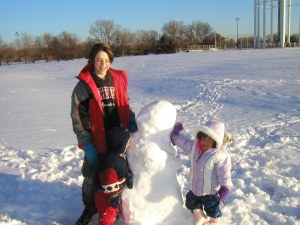 Antonio LOVED to eat snow. Here he had a whole snowman to eat!

Sam was 12 going on 13 when he took over their care. Sam had a tough initiation with the children because they loved and adored Charlie.

But you know what, in short order it became “Sam.” “Sam.” “Sam.”This isn’t to say that my children give their loyalty easily or to just anyone.

When we first took them to an in-house daycare at seven and eight months old, it was simple enough to slip off in the morning, but when I picked them up to bring them home in the afternoon they would sob so hard in the car that I would have to pull off the road onto a side street and take turns holding them until they felt safe outside of my arms. Only then could I drive again.

Leaving them in the care of someone else so traumatized them that Jody and I decided one of us would have to be a stay-at-home mom.But now, Antonio and Crystel would like us to have more dates so Sam can come over and babysit. 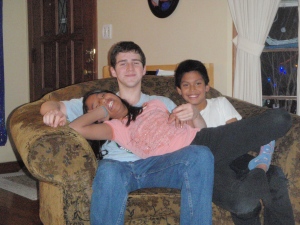 Saying that Sam is the children’s babysitter doesn’t do him justice. Instead I describe him as their adult male caregiver. He has been their fulltime caregiver for the last four years. During the summer he spends over eight hours with them every day from the time school lets out in June until it starts again in September. 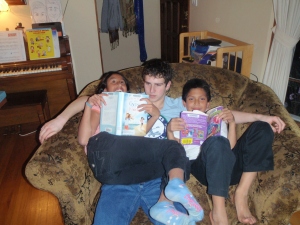 Sam taught them to read

This summer they worked their way through the books Dangerous Book for Boys by Conn and Hal Iggulden and the Daring Book for Girls by Andrea Buchanan and Miriam Peskowitz.Antonio and Crystel have had options to do the park program, community activities, a season pool pass, Fun Club, etc…. but they choose Sam. They figure they have it all. And, they do. Most often in the afternoon I come home and all three of them are playing in our backyard swimming pool. They don’t feel like they are missing out on seeing their friends as Sam also watches them when playdates are scheduled.

During the summer Sam, Antonio, and Crystel bike all over Richfield. I often get compliments by people who have spotted them: Police Officers, Tae Kwon Do instructors, and friends. They are surprised how mobile and safe Antonio and Crystel are. The dentist remarked to me how Sam was definitely in-charge during their summer appointment but was struck by their affection for one another.

Sam has spent overnights with the children when Jody and I have gone on our own adventures. We were thankful that we had him to call when we were in Mexico and their Aunt and Uncle who were staying with them had to leave suddenly. Sam went over to our house, spent the night with Antonio and Crystel, and got them off to school the next morning before he himself went to school.

This year at school conferences (4th grade) Antonio and Crystel’s teachers were impressed because they generally see a dip in reading because of no school during the summer. Antonio and Crystel’s reading level had actually increased and there was a steady incline in skill. Sam taught them how to read when they were five.

Crystel is looking forward to the day when she can start babysitting. After she turns 11 and takes the community babysitting class she will be ready. She has had Charlie and Sam as excellent role models in being a great babysitter.