I ask myself this as I watch her and her friends, all clothed in black, carrying cardboard signs down our street. The air has a strong scent of paint thinner and diesel fuel from the markers they used to create their signage. One sign says, Silence is Violence. I say a prayer that the teens lives this motto and that they never stay still when they witness or have knowledge of a violent act. This would bring me lifelong comfort for their safety as well as others.

The five 17- year-olds are walking to 494 and Penn where there will be assembling with others.

Is this a protest? A march? A gathering? Jody and I are not sure. The information we get is a jigsaw puzzle at best. We hope to God that they aren’t planning on walking onto the freeway. Jody and I wouldn’t support that. We tell her so. Yet, we also wouldn’t stop her.

Be Safe, Don’t Die. I want to holler after the teenagers. I stop myself, though this is not an unusual farewell that my family has given each other when we leave the house. I don’t need to heighten any uneasiness the teens may be feeling. How do they know what they are walking into? For certain, I don’t.

Why does she march?

The pandemic has allowed our family more time together. Jody and I take hour-long walks with Crystel. On these walks Crystel talks about how she wants to make a difference. She is particularly interested in making a lasting change in Guatemala, the country of her birth. She had a 3-week homestay and language school trip planned at Casa Xelaju Spanish School in Guatemala for this summer. COVID-19 travel restrictions abruptly halted her plans.

Jody and Crystel joined the mourners at 38th and Chicago where George Floyd was murdered. Crystel placed white hydrangea blooms from our garden at the memorial site. Days later, I accompanied her and her friends to George Floyd’s memorial service in Minneapolis. I wondered if there would be a food truck and porta potties. When I confessed this to Crystel, she gasped and rolled her eyes.

Why does she march? 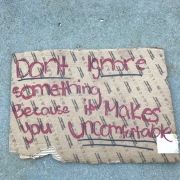 Don’t ignore something Because it Makes you uncomfortable

Why don’t I march? The question intrigues me. Why her, why not me? Then, I remember why I joined the Peace Corps when I was 30 years old. I had that same feeling, the same drive, that I see in her. I wanted to make a difference.

We can do that. I’m thirty-one years older. I march in a different way.