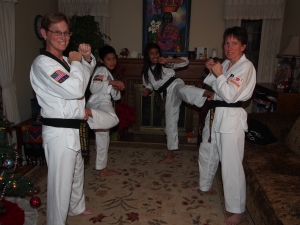 4 black belts. Not an easy path for any of us. There were times I thought Kor-Am Master Lindeberg would kick the entire family out.

First we had Mr. Antonio who at 4-years old loved to jump on classmates, cartwheel back to his place in line, and once there distract others until it was his turn again.

Master Lindeberg agreed that it was best that I didn’t watch Antonio while he was in class since it made me cry. I would go for a run instead. 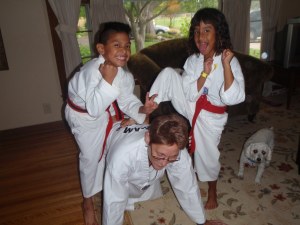 What you do to a no belt.

The plan was for Crystel to start one year later to give Antonio time to advance on his own timing. Well, that wasn’t happening. We started her anyway.

Crystel’s kihap (“Taekwondo`s spirited shout) was just a bit louder than a newborn chick … for years. Her defense was definitely going to be her best offense.

After a year she started again. When she got to be a candidate for black belt I joined so she could humiliate me and feel good about it. 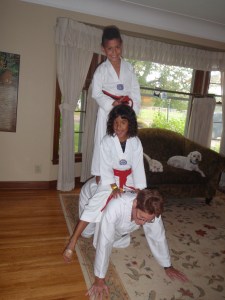 I thought that I might be the first no belt, who stayed a no belt, because when people were standing frontwards – I was backwards, if they were east – I was west. That certainly did keep my children engaged. They found a new joy in Tae Kwon Do.

I kept showing up though and Master Lindeberg was kind enough to allow me to continue training even though I was slower than others in catching on.

I must say that I spent extra time working on a menacing look while placing my fist into my palm to scare the little kids even though that wasn’t part of the curriculum. Unfortunately, you don’t get a trophy for looking tough at little people.

Jody watched all of us get our black belts and then joined figuring if the three of us could do it without getting kicked out of Tae Kwon Do surely she could. 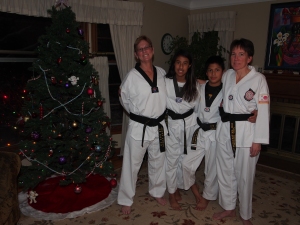 Now since we are all black belts, the only hope for me is to keep working on my look because that sweet girl of mine wants to kick me in the head (and has), Antonio does pay attention, and Jody is in my age group. I might be sparring her some day in a tournament and god help me if she wins.

Earning a Black Belt is just the beginning. 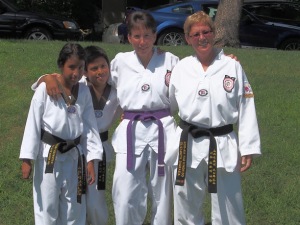 I started Tae Kwon Do, at Kor Am Tae Kwon Do School when I was 50 years old. Yes, it was an age thing, time to do something new, challenge myself, and show the world that I’m really not all that old. For four years, I had been sitting with my back against the Do-Jang wall watching Antonio and Crystel progress through the belts. When they became black belts I decided to join.

I told myself and others that it was to help keep the kids interested in Tae Kwon Do. Really, it was because I secretly wanted to join and it took turning 50 to gather the courage.

Not that Antonio and Crystel didn’t liven up a bit when they watched me put on the stiff white uniform. Crystel got this sparkle in her eye. I knew I was in trouble then. Because they have a black belt, they outranked their mom. When they weren’t telling me what to do they were laughing. I always seemed to be a kick behind, a jump behind, a punch behind and pointed in a different direction than the other students. I thought I might be the first person who didn’t progress from a “no-belt” to a white belt. 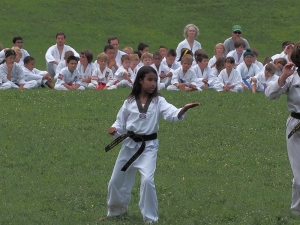 It was a source of pride for me when after five classes that white belt was placed around my midsection. At Kor Am Tae Kwon Do, the adults and children take classes together and I’m sure that my smile was just as wide as the five-year-old that started class at the same time as I did. And, I’m pretty sure he was already better than me. 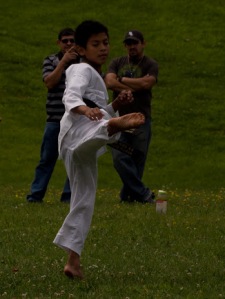 The exercise time that I spent running was now being eaten up by three to four classes a week at Tae Kwon Do. At first, I was disappointed. I wasn’t getting the same type of workout. Doing Tae Kwon Do, I wasn’t even sweating. I was such a klutz in class and had such a slow learning curve that it was a personal challenge just to show up and take my place at the back of the room.

I persevered and started noticing benefits. With the twenty minutes or so of exercises that we did at the beginning of class I found that I was able to stretch my legs more than I had in years. I also felt more in tune with my body. We used so many muscles groups exercising that I knew myself better. So, even though, I was only running on the weekends, I felt like I was in better shape because I was just so much more aware of my whole body.

Kihap (the yell that is shouted when practicing Tae Kwon Do) is the hardest thing for a new student to do. The yell often sounds like “Haaaa!” or “Ahoe!”  The kihap is designed to regulate breathing, and can be used to intimidate, distract, or startle your opponent which can cause the effect of “freezing” your opponent momentarily just prior to a strike. For me, I think of it as in terms of my personal statement. Me saying, “I’m here! Take notice of me! This is my space!” But even though, I’m not known to be shy, it took many classes for me to find my voice.

I love that in Tae Kwon Do you are expected to be loud and defend yourself. I don’t know of any place else where you are not only given the right to defend yourself but it is expected. I used to be concerned that in a dangerous situation where there was a threat of being assaulted that I would lose my voice or become immobile. I don’t worry about that anymore. Tae Kwon Do has taught me what I can do. 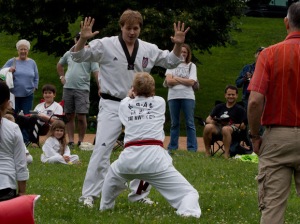 Sparring is my favorite discipline of Tae Kwon Do. I enjoy when I can kick a person in the head. That accomplishment hasn’t come without me being on the receiving end of a few black eyes, bloody noses and sore ribs. Still, there isn’t any quit in me.

A part of the membership oath of Kor-Am Tae Kwon Do School is that we are united in mutual friendship. I feel a kinship with everyone from the youngest member to the oldest member, belt and age-wise.

And especially with the people on whom I get to practice my strikes.