She was up barfing at four. When I arrived hours later, she had pink cheeks, a kitty ears headband, and was play-ready. She assured me it wasn’t really being sick to barf, but pre-school wanted her to stay home. She was sad Mom wasn’t staying home, sad to miss her friends, but game for whatever Grandma brought to the day.

Lemon-lime soda was no longer needed. Water was fine. Munching many plain saltines and a cup of dry cereal made up for a missed breakfast. Within minutes we were on the sofa deep in a Brain Quest card deck working through sequencing challenges, adding, matching letters and words, talking about calendars and telling time on old-fashioned round clocks.

Those clocks sparked the first pronouncement of preschool wisdom. She thought I must have had a clock with numbers in a circle because I am old. I corrected that statement to older. She didn’t buy the change. A teenager had given me the same look when I asked if the general store in a small town carried watches.

With interest in Brain Quest waning, I suggested we start an art project. She turned down the idea because she said she loved to learn things. There wasn’t anything better she could have said if she hadn’t finished with a sympathetic sigh before sharing that it was sad that old people couldn’t learn stuff. That’s not true I replied and told her about a friend who learned another language to work with immigrants, another friend attending university classes, my own tap-dancing studies. She frowned and said maybe I had special friends. That I do.

Even at her age I couldn’t do backward summersaults, so she had me at that, but I didn’t expect to frighten her when I got down on the floor to do a plank next to her. Old people could get hurt doing planks she said. I replied anybody could get hurt doing planks, but we were both strong because we could hold a plank for almost a minute. Then I sat back to watch her attempt head stands and intricate twirls.

We rounded out the day with dressing the cat, coloring paper dolls, and baking a chocolate cake. She looked tired, but happy. Her mother looked tired after an important work day. And grandma drove home, happily tired out after an unexpected play day. 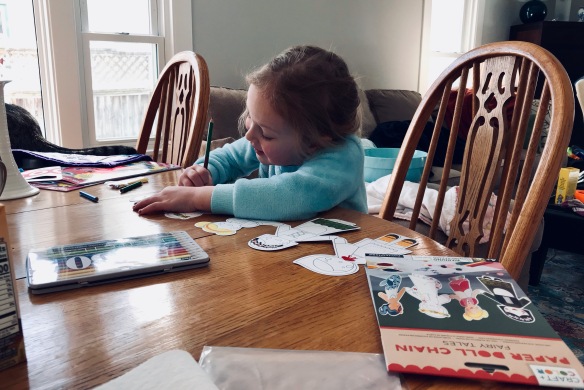 In Great Britain, more than 120,000 online voters recently suggested “Boaty McBoatface” as the name for a British polar research ship. The Science Ministry in Britain overruled the popular choice, choosing instead to name the ship after naturalist and broadcaster Sir David Attenborough. Although I loved the silliness of “Boaty McBoatface,” I wasn’t surprised it didn’t make the cut. But it did remind me of the power and persistence of nicknames.

Some nicknames are just plain stupid and annoying like the ones I was given in high school. And no, I’m not giving them new life here! Other nicknames are mocking and hurtful. I never knowingly bestow those names. If I know that someone dislikes one of my nicknames, I try to drop it.

But for me, nicknames are sign of affection—a name I give someone to acknowledge our special connection. Or they can also be a humorous name for a car or pet. For example, my ’67 Chevy BelAir was “the Blue Whale,” because it was enormous. Sometimes we called my collie Tasha, “Slosha,” because of the way she dripped all over the floor when drinking.

When I was growing up, nicknames were common in my family, and my father originated most of them. They were affectionate (or at worst, teasing) and often nonsensical. I don’t know why he called my oldest brother, who certainly wasn’t smelly, “Big Barnsmell.” None of the rest of us called him that, so my brother tolerated the name with good grace. Dad called my next brother, “Sport,” which at least made sense, because that brother was athletic.

Sport called me “Snickersnee” because of my sneezing and allergies. Eventually that was shortened to “Snee” or “Snee Baby.”

My siblings and I also had nicknames for my father although we didn’t always say them to his face—“Big D” for Dad or Don (his first name).

It was probably inevitable that I’d have nicknames for my sons. I’ll spare you (and them) the dippiest names, which tended to be variations on their first names. However, during his middle years, I called my youngest, “Larry Bob,” which had nothing to do with his real name, but it sort of went with the goofier side of his personality.

When our sons got muscles and grew half a foot taller than me, I began calling them “Otis” and “The Other Otis”—kind of like calling them, “You big galoot”—a teasing way to acknowledge how much bigger they are than me. So far, they’ve tolerated it pretty well. No doubt they have names for me too.

Do you use nicknames for your family and friends? How about your car? Pets?