Several years ago, Lisa, our writing group’s founder, tried to quit. She feared the realities of her treatment for stomach cancer (belching, gas, occasional gagging, and a backpack of liquid food that connected to a port in her stomach) were off-putting. She was also discouraged, because “she wasn’t contributing anything,” meaning that she didn’t have any writing to share with the group. 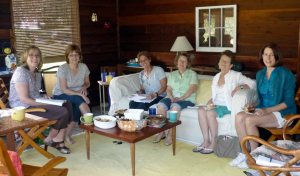 The WordSisters a few years ago — Brenda, Jill, Elizabeth, Ellen, Lisa, and Jean. Rose is behind the camera.

The other five members of the group listened, but as she talked, it was clear that thinking about writing gave her a break from thinking about her health, and she still enjoyed our company. One member suggested that we could all chime in with our own bodily noises if it would make Lisa feel more comfortable. We swiped away tears and laughed ourselves silly at that suggestion. Lisa agreed to stay involved in the group.

We support each other as writers.

That moment exemplifies the basic philosophy of our creative nonfiction writers’ group and why we’ve been together for 13 years: we meet to support each other as writers. Sometimes that goes beyond reacting to each other’s writing.

Besides giving each other feedback about writing projects, we also provide moral and tactical support:

Most of all, we believe in each other.

Earlier this month, I applied for an Emerging Writer’s Grant and a Loft Creative Prose Mentorship, knowing full well that I’m competing with my good friends for these honors. I really want to win. So do the women in my creative nonfiction writers group.

We’ve known each other for years. We’ve visited each other’s homes. We’ve cried together when one of our circle died. These women often know more know about the contents of my mind and heart than some of my family members do—they read my innermost thoughts firsthand when our group meets.

They are insightful critics and steadfast cheerleaders. Because we share personal essays and memoir, our subject matter is always personal. Sharing our stories requires trust, and we’ve strengthened that trust over the years. The other writers don’t judge me or my life. But they do evaluate my writing craft and urge me to do my best. We all understand that the writer is different from the writing.

Perhaps the ability to draw the distinction between the person and the craft is why we’re able to draw other distinctions and balance two seemingly conflicting ideas: we’re friends and we’re competing.

Although there have occasionally been moments of frustration or resentment among the group members, we have been able to rise above them. For me, these aspects of our group dynamic have helped keep our competition from turning into conflict—

I don’t know for sure what the magic is. And I hope talking about it doesn’t wreck it. I’m proud to be a part of a group that has navigated these tricky waters successfully . . . so far.

I want an Emerging Writer’s Grant or a Loft Mentorship. If someone else in the group wins, I’ll be sorely disappointed for myself. But I’ll be happy for her.