Antonio had mumbled and grumbled up the zigzag paved road to the village square the first evening at Santa Cruz la Laguna and often brought up that traveling by tuk tuk was an excellent way of going from point to point and why didn’t we do that more often. He hadn’t warmed to the idea that we were a-people afoot. Still, I was hopeful when he was handed a walking stick for our hike up Pampatin Canyon. He could poke, stab, and slash his way through the jungle, over the creeks, and up the gorge that starts its accent from the backyard of Los Elementos. In my suitcase back at our suite were the guide books Moon Guatemala and one that I thought would be particularly helpful on our trip, Moon’s Guatemalan’s Western Highlands Including Chichicastenango & Lake Atitlan. But I didn’t crack the handbooks open our entire trip. No need. Lee Beal and our Guatemalan guides were our experts. They went into detail about the age-old traditions of the Mayans, the colorful mountain villages, the indigenous Guatemalans, and the forest jungle.

After I started blogging about our trip, I quickly learned that even Google couldn’t provide the information about the area surrounding Lake Atitlan that Lee and the guides did. It was through Lee that I learned that the old and original name Mayan of the village of Santa Cruz (Spanish for Holy Cross) is Pampati. The name of the canyon is from this origin.I shrugged when handed a walking stick by our guide, Alex. I’m not a grumbler. I’m agile. I can skip up rocks. I survived Kor Am Tae Kwon Do black belt camp. Quickly, I learned the poker was useful for pushing aside large leaves that I termed itch weed. Alex told us the correct name of the leaf but my head is only so big. As far as I was concerned it was itch weed and I shouldn’t touch it. We stopped often on our trek up the canyon as he pointed out a fruit, a plant, a leaf, and coffee plants.

Alex showing us the pitaya fruit

Alex nodded to our left towards two children, who looked to be about 5 and 7 years old, resting, tucked under a tree with a bundle of wood made up of dead twigs and branches. Alex told us that any child who wasn’t in school or working had the job of fetching wood from the forest for cooking fires or to sell. Of course, I hoped Antonio and Crystel were hearing this.

When we received photos from their birth families, I sat with them, and told them to look past what their eyes first saw. “See your family sitting around the table and on the bunk bed?” I said to Crystel, “From this photo you can tell that this one room is the family’s living room, bedroom, and kitchen. The room is smaller than your bedroom.” I added, “Look past your family and see the toothbrush on the window sill? There is only one toothbrush. It is likely that your family is sharing that toothbrush. If you look at the walls you can see that they aren’t painted. The walls are plastered or whitewashed.”I wanted Antonio and Crystel aware on our Guatemala trip. This is their birth country: beautiful, vibrant, rich in culture, poor and illiterate. Alex and Samuel our guides, would receive 200 quetzales, about $25.00 per day for their service, their skill set speaking English, is marketable. The average Guatemalan earns 50 to 60 quetzales a day, about seven dollars.

Alex showed us a pitaya (Mayan word for the color of the inside of the fruit) also known as dragon fruit. When he opened it with a machete I could see that it was a fruit that had been offered at our breakfast buffet at Hotel Grand Tikal Futura, zona 7, where we stayed for three nights in Guatemala City. Jody and I encouraged Antonio and Crystel to try at least a taste of something new at each meal. The pitaya tasted like a cross between kiwi and pear.

On our hike we met a local Mayan woman who was picking pitayas to sell at the market.Our trip in June of 2012 was very different than our trip in June of 2010 for many reasons. One of them was the fact that we didn’t take any pictures of the Guatemalans that we saw in remote villages. Having Alex, Samuel, and Lee as guides meant that taking photos was possible because with their Spanish we could ask permission. Antonio and Crystel have more than four years in a Spanish dual language school but their grasp of the language was most evident when they were buying boom booms (lollipops) in the tienda (store).

Locals carrying firewood down the canyon

Our goal for the canyon hike was to reach the waterfalls. We didn’t make it before Alex called Lee and found that it was time to meet up with him to visit our first NGO (non-government organization). It was odd to me that we were in a third world country yet you could use a cell phone to call someone. Cell phones are inexpensive in Guatemala. You can buy one for less than $20 dollars. This is something I will do on our next trip if only to be able to call within the country.

Later that evening, Zach took Antonio and Crystel back up the canyon to see the falls. The 14-year-old and two nine-year-olds returned breathless, happy, and flushed with energy. The grumbly nine-year-old boy had transformed into an adventurer. And truly, he didn’t grumble the rest of the trip. But then again, on a few occasions in villages we all piled into a tuk tuk to get from point A to B. Funny thing, his Spanish came alive when I told him it was up to him to ask for a tuk tuk and find out where it would pick us up. Ah, kids.

Our first NGO visit, Mayan Medical Aid, opened by Dr. Craig A. Sinkinson, M.D.,  in 2004 serves the 99% native Mayan Indians that make up the population of Santa Cruz. To help subsidize the clinic, he gives private Spanish lessons along with his Guatemalan wife who is also an M.D. Dr. Sinkinson developed a medical Spanish accredited program that also brings in funds. The benefits of the program for medical students are the

one-on-one attention, the ability to participate in the clinic, and the immersion experience. Prior to Dr. Sinkinson coming to Santa Cruz, 12 to 15 Guatemalan women died each year in childbirth. Most years they now have 0 deaths. The locals come to the clinic for medical assistance with digestive, reproductive and skin concerns, diabetes, and emphysema.I found the doctor to be very hospitable and knowledgeable with a respect and passion for the Mayans that was similar to Lee’s. One of Dr. Sinkinson’s goals is to teach the Guatemalans working with him to operate the clinic. In this way if something were to happen to him, the clinic would be self-sustaining.

The goods we brought–gloves, vitamins, aspirins. Oh, yes, and suntan lotion. Dr. Sinkinson was happy we left the large blue suitcase on the cardboard box for him to use.

Antonio and Crystel sat patiently while we visited with Dr. Sinkinson. Though Lee and his wife Elaine don’t have children, they have a sense for when it is time to move on. Prior to leaving the clinic, we stuck our head into an office and saw the suitcase we had brought filled with sterile gloves, Centrum, and Ibuprofen for the most part. Alex asked what was in the spray cans. I explained that it was suntan lotion for the clinic. He laughed and pointed to his skin. All I could do was raise my hands and tell him that it was on the list. Funny foreigners. 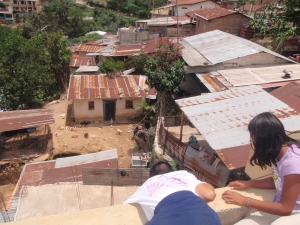 What are Antonio and Crystel doing and where are their mothers?!? You can see a typical casa in the foreground. Tin roof, chickens, dogs, firewood, dirt yard.

Walking across the village square, Lee said lunch at Sabor Cruzeno Restaurant was next. The restaurant is part of the CECAP Culinary Arts program that trains young people for successful employment in the tourist business. CECAP is supported by Amigos de Santa Cruz foundation of which Lee is on the board.

Local tienda where Antonio and Crystel buy their boom booms. This Mayan is a graduate of the CECAP vocational training center run by Amigos de Santa Cruz

Though not yet totally immersed in village life, the di Grazia family was beginning to place their fingertip on the local culture. We were closer than we had ever been before to the Guatemalan way of life.

If you like my blog writing hit the subscribe button on WordSisters. You will automatically receive my posts every other week. Also, I find Lee Beal’s blog very interesting.  He writes about his meanderings in Guatemala, Lake Atitlan, and the Mayan culture. http://lakeatitlantravelguide.com/blog/