A screeching, beeping monster clawed a mountain of dirt from my front yard, pirouetting in a repetitive mechanical dance.

In a surprising moment of consideration, the monster’s keepers preserved my ratty, overgrown boulevard garden, which fringed the gaping hole where sidewalk used to be. As if that garden is worth the care they gave it! They didn’t know I’d gladly be rid of the hosta and daylilies.

Workers in neon green coveralls appeared waist deep in the front yard. Urban prairie dogs. Do they like standing in holes, dirty and damp? Being where the rest of us don’t go? Searching for a pipe—hidden—but not exactly a treasure.

Weeks later, cars still charge up to the roadblock in disbelief, apparently thinking, You can’t stop me, I’ll get through. Some seem to contemplate launching à la Thelma and Louise over the one-foot precipice into the scraped dirt and escaping, only to accept reality, veer into a nearby parking lot, and cut through the alley. Back on their way.

That’s how this summer, or really this whole year, has felt because of COVID. We’ve hurried toward the life we wanted, only to see—again—not here, not now. Go around, adapt, try again.

At night it’s peaceful. No clattering buses driving by. No thumping bass from passing cars or snatches of song from cyclists.

Gung Pao Chicken #2 Spicy is written on my desk calendar, on a piece of scrap paper in my bag, at the bottom of our grocery list. My husband’s favorite order from a small Vietnamese restaurant we like. Okay, a place where we ate so often that the servers know us.

It is a neighborhood eatery where we could relax after a busy day or before running errands. Carry out orders flew from the kitchen. Tables were filled with college students, young families, parents with grouchy high school kids, retirees. Large fish tanks amuse young diners. Food came fast. On rainy or winter nights the crowded room felt cozy.

When curbside carry out became available, we called our place. The first night, part of our order was missing when we got home. Two weeks later my stir fry had little flavor and the rice needed warming. We noted the slip-ups, but didn’t dream about trying another place or dropping Vietnamese from our carry out rotation. They know who we are when we walk in. I know the person who says it is good to see me. They prefer cash and I understand how credit card fees eat into small business sales.

The food is good, but not great. It is truly all about the people and setting. And we want to keep their kitchen busy and their staff working until that atmosphere can be restored and there is time to talk about the world as water glasses are filled. We have a connection. In cities that builds neighborhood.

Storefronts and restaurants have already closed on their block because of seven months without stable sales and the whammy of riot damage. Social distancing outside the watch repair place, there are no lines next to me at the theater where a new release is showing. No patrons sit around tables at the tea shop. Inventory looks low at the corner gift store. What will the holidays look like for these small merchants? How will a tenuous consumer economy support neighborhood places?

So much is unknown because most of us haven’t experienced circumstances so forbidding. This has been described as the worst economy since the Big Depression. Hopefully there will be enough folks in the neighborhood, with resources, ordering Gung Pao Chicken to keep owners and employees of small businesses intact. In the meantime, let’s keep safe and watch out for each other.

I have never cared deeply about having a perfect velvety green lawn. Or rooting out dandelions, creeping charlie, and crabgrass. And yet, lately I’ve been trying to rehabilitate my lawn.

My neighbors care even less than I do, so creeping charlie crept over from one neighbor and dandelions blew in from the other neighbor. Crabgrass sensed an opportunity and launched its own attack. After only one inattentive year, our yard became The Bad Example. Clearly, its sorry state doesn’t bother my neighbors, but it does bother me.

I’ve invested a lot of time creating and cultivating flower gardens, so having a ratty weed-choked lawn seems incongruous.

Creeping charlie is the worst. I can live with it around the perimeter. But I thought it would be nice to have some actual grass in the main part of the lawn. Being organically minded, I didn’t want to nuke the yard with chemicals that would kill the weeds but poison the butterflies, bees, and birds I’m trying attract.

I read up. Several websites suggested covering the offending patch with cardboard and plastic in the fall. The heat and lack of light would kill the weeds and then I could rake them off in the spring. We tried it and all that did was kill the grass. The creeping charlie was alive and well. Sigh.

So then I began digging it up. A s l o o o w w w process. Until The Perfect Husband got involved. Boom. Done. Except for the oh-so-tedious process of knocking the soil off the dead weeds so the city would agree to take them as yard waste.

We reseeded. Lush grass is due to sprout any day. 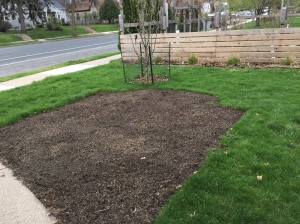 Meanwhile, all those dandelions I dug up last year are back and showing me who’s boss.

This focus on lawn care may be a fool’s errand. But hey, it’s spring. Anything’s possible.

In 1967, when there were race riots in Detroit and Toledo, my hometown, I was 12. Bobby Kennedy and Martin Luther King were assassinated in 1968. Chicago policemen clubbed protesters who chanted, “The whole world is watching” at the Democratic National convention in 1968.

In 1970, when Ohio National Guardsmen killed four students and injured nine others on the Kent State University campus, I was 15. Vietnam War protests took place across the country. Students took over college campus buildings. Protesters stormed government buildings. Thousands marched in the streets.

The civil rights movement and war protests shook our country. The old ways—from entrenched institutions like segregation to how political parties worked, and what we wanted from authorities like police—were under siege and crumbling. As a teenager, I felt the turbulence. Anything could happen. Was happening. Although I was against segregation and the Vietnam War, the violence associated with ending those ills scared me.

However, I sensed the dawning of a new era and was hopeful that real change, as well as peace and justice, were possible.

Today, I have the same sense. Once again our country, and indeed, the Western world (Great Britain’s Brexit and the European union’s struggles with immigration and identity) is at a crossroads.

No matter what, change is gonna come. 10 years from now, our country is going to be different.

Decades have passed since I was a teenager who was bewildered by events and worried about our future. Today, I still worry about where our country is headed, and I don’t know what the coming changes will look like, but I’m hopeful.

I believe that people of good faith will work to end systemic racism.

I believe Americans will return to our core values: we’re a nation of immigrants who are committed to religious freedom.

I’m hopeful that despite our differences, we can redirect our political leaders so they once again work for all of us.

If you feel discouraged and hopeless about the possibility of change, click to this video set to Sam Cooke’s civil rights anthem “A Change Is Gonna Come” to be reminded of how many unbelievably hard changes have taken place since the late 1960’s.

None of the coming changes will be easy and they will certainly be imperfect. Nonetheless, I believe that Americans’ good sense and love of justice will prevail.

“I know a change gonna come, oh yes it will.”

In late April and early May, my mind is abuzz with gardening and landscaping plans. I research plants, dream up color schemes, make lists, haunt garden centers, and chart the hours of sunlight for my new garden—yep, I’m hardcore. In years past when I had a large suburban lot, my focus was on what to do with all that space. 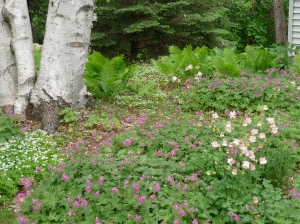 One of our four large gardens in the suburbs

Now that I live in the city and have a very small yard (intentionally), I focus on defensive landscaping—how to create something attractive to camouflage undesirable views, including those of my much closer neighbors’ yards.

What if I had a silver moon clematis growing on a trellis by the garage?

Maybe a columnar birch would camouflage the neighbor’s garage.

What if we added clumps of feather reed grass along the fence like this?

In April everything seems possible. By August, it’s all over. But if this year’s plan doesn’t turn out as great I’m picturing, there’s always next year!