Most days I’m fine with donning my invisibility cloak (the uniform of people 60 years and older) and going about my days. I’m content to fly under the radar, doing what I love. However, recently I’ve been reminded that too often the world doesn’t see older women and when it does, it’s with a lot of inaccurate assumptions—supposedly we aren’t good with computers or cell phones, we’re frail, we’re clueless about financial matters and the workplace, and so forth.

Except those caricatures don’t resemble any of the women I know.

I’m 68 and have friends ranging from 60-78. A quick review of approximately twenty women I know turned up a more realistic and positive profile—

There isn’t a helpless, clueless woman in the bunch.While these women are all wonderful, they aren’t rare exceptions. They’re typical. I wish more people saw us for who we really are—strong, smart, capable, and fun.

Trees are beginning to change. Yellowing leaves increase in numbers each day. Kids still run on beaches and play wherever a swing set is not closed. Young people gather with cases of beer, many without masks. More cautious folks crowd outdoor dining places. Multi-generational families wander about as if it were August 1, not September 1. COVID has changed the normal rhythms of summer while Mother Nature delivers heat and humidity where houses didn’t need air conditioning ten years earlier. Lake Michigan pushes beyond its all-time high water mark, devouring docks and houses’ front yards.

When it already feels as if the stars are out of synch, COVID has taken the fathers of three friends or relatives. Three members of the Greatest Generation, living in three different states, in congregate facilities for three very different reasons. Friends and family called them Jim, Dom, and Marlin. They had eleven adult children among them plus almost four dozen grandchildren or great-grandchildren. Two were veterans and one farmed his entire life. Family photos show them joking with great, tall grandsons, sitting with the newest grandbaby resting on an arm, in wheelchairs by Christmas trees. These were men who loved and were loved.

Thanks to COVID, they died comforted by staff members as their families were mostly kept away. In the heat of August, sons and daughters mourned the once strong fathers who built businesses, walked fields, fixed tractors, painted houses, taught them to throw a ball, sang next to them in church, made the final journey of life without endangering family.

The Greatest Generation is disappearing as COVID ignites within our communities. They fought for our country’s freedom, raised families, built the cars and houses and machines of the 20th century USA, fed the world. In turn COVID has left us unable to protect them, not even gather for proper farewells.

As summer sneaks away, as our elderly pass in the settings meant to keep them safe, as our days of small social gatherings and playing games outdoors with our grandchildren are numbered, COVID is like the spreading black-eyed Susan which left unchecked threatens to obliterate the beauty of other blooms.

In honor of James Armstrong, Dominic St. Peter, and Marlin Hunt. With sympathy to their families and to all who have lost loved ones to this pandemic. Friends, please help friends stay healthy and strong.

The University of Minnesota and the Rajender Consent Decree are probably far from your thoughts. Most of the time they are far from mine, too. However, recently I realized that it’s been 40 years since the decree bearing your name helped me.

I’m writing to thank you.

Your courage fighting gender discrimination changed my perceptions of the world and set me on a feminist path that informed the rest of my life—how I see myself and thought about my career, how my marriage works, and how I raised my sons.

Forty years ago, I was a Freshman Composition instructor at the University of Minnesota-Morris, my first professional job. In the spring of 1980, I got in trouble with the all-male senior faculty in the English department, because I wanted to present a noncredit lecture about women’s literature for a Continuing Education series.

Several of the senior faculty reacted with a policy that stated, “. . . instructors in English should not participate in off-campus events, either formal instruction or informal presentations, which, in effect, call for a person who has been judged expert in the teaching of English literature.” In other words, I wasn’t supposed to talk about literature even though I had an M.A. in English Literature. The policy was odd and confusing. Several of the literature professors at UMM had been tenured with only a Master’s degree. But my credentials—which were the same as what some of them had—were suspect.

At first, I was more scared than angry (anger came later). The Continuing Education director and the EEOC officer knew I was afraid I’d damage my career by fighting the policy, so they informed the academic dean about my dilemma. The dean and others were aware of your gender bias case against the Chemistry department on the main campus. Consequently, the dean insisted the English department rescind their policy, and I was allowed to give the lecture.

Later that year, a number of faculty members, including me, received a $2,000 raise as a result of the Rajender Consent Decree. It’s hard to imagine now, but increasing my salary from $12,000 to $14,000 per year was a meaningful raise then. In general, it’s hard to convey to younger people just how crazy the late 1970s and early 1980s were for professional women.

Your decision to fight the University of Minnesota had a lasting impact on my life.

At 25, I learned gender discrimination was as real and insidious as the fatherly men in the English department, who didn’t see me as their equal and wanted to limit my opportunities. That experience didn’t drive me away from academia, but like you, I left the academic world several years later.

Your career was exemplary (first a Ph.D. in Chemistry, later a law degree). Mine was much more ordinary, but I was always aware of the example I set as a woman in the workplace. Your determination to fight gender bias had a far-reaching effect on me and so many other women. I want to acknowledge your heroic contributions.

Thank you again for your courage.

My father never talked about his experiences in the Navy during WWII until late in life. He was in his 80s when I learned he’d been on a destroyer off the coast of Normandy during D-Day and that his ship, the USS O’Brien, had been hit by a kamikaze pilot when the war shifted to the Pacific. He never glorified war or his role. Like so many men who served in WWII, he said that he hadn’t done anything special—he was just doing his job like everybody else. 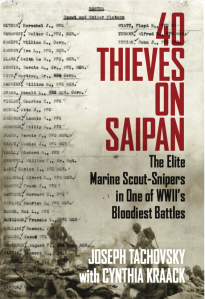 WordSister Cynthia Kraack coauthored 40 Thieves on Saipan with Joseph Tachovsky, whose father Lieutenant Frank Tachovsky, led the elite Marine Scout-Sniper platoon known as the “40 Thieves.” The younger Tachovsky didn’t know the incredible scope of his father’s role until his father’s funeral, which sent him on a quest to learn more. In 2016, he came to Cynthia with hours of interviews with surviving platoon members, letters, and military research that he’d gathered.

During an informal interview with Cynthia I asked, “What was the story you wanted to tell?” She explained, “The book is a fairly accurate capture of the story I wanted to tell. Understandably, the old men he interviewed found it easier to talk about the lighter side of their Marine service—the jokes, the pranks, the exploits. They said a situation was tense without describing the conditions. Joe wanted to pay tribute to the men and we focused on a line of his father’s: ‘War makes men out of boys and old men out of young men.’ The 18-year-old who went to church with his family and had a last Sunday dinner at home before reporting for training would never come home. The man who came home would need time to rebuild his connection to living outside of war. I also found myself wanting to write a book that would help women understand war’s imprint on the men in their world.”

Last fall, I visited Omaha Beach and other sites associated with the D-Day invasion. Part of me understood that although I was hoping for a glimmer of Dad’s experience, I wouldn’t find it. There’s no way I could possibly understand what he went through. Maybe a soldier or sailor could, but not me.

I sensed that longing in Joe and Cynthia, whose father also served in the Navy in the Pacific Theater during WWII. As coauthors, their main focus in writing the book was to remember and honor the men known as the 40 Thieves. Ultimately, their work was personal, too. They hoped to gain insight into their fathers, access those younger men, honor and remember what they did. As coauthors, they have.

Has never pulled a man from a burning car after fishing on Lake Erie all day and then driven home and cleaned the perch.

Can’t think of the 1967 race riots in Toledo without being grateful that the chief wasn’t hurt, although his white fire coat made him a target.

Would hear his voice on the fire radio and picture him speeding away from No. 5’s fire station whenever there was a two-alarm fire.

Learned from the chief to quiet her voice in a crisis, because it helped her and the patients in ER calm down.

Wouldn’t let her teenage boys play with a potato gun fueled by hairspray, because she and the chief had both seen the burns that result when hairspray ignites.

Looks for exit signs in case of fire, never overloads electrical circuits, and is careful with the candles she burns at home.

Thinks of the years of volunteer work, the anonymous donations, and the scholarship he endowed.

Hopes to live up to his example.