In 2012, when Elizabeth and I launched WordSisters, we weren’t sure where this adventure would take us or if we could keep up the discipline of posting once a week. Our original motivation was attracting agents and publishers, but soon we were blogging for the pleasure of writing. We had things to say and stories to share. 10 years later we’re still writing!

Through the years, more sisters in writing joined us: Cynthia and Bev are regular contributors, while Brenda, Jill, Jean and Rosemary have occasionally posted.

Our insights arise from our lives—mothering, working, aging, living through COVID, reacting to events in the news, planning our futures and setting goals. I’m proud of the breadth of topics we’ve covered and the connections we’ve made with strangers all over the world .

Most of all I’m proud of us for persisting. For being here long after many bloggers have faded away.

One of our strengths is the variety of voices, styles, and subject matter each of us brings. In that spirit, here is a collection of best-of posts. I hope you’ll enjoy sampling them.

Thank you for being our readers.

No More Guilt with Every Bite

What Work Would I Do if I Were an Immigrant?

I Didn’t Come This Far

Until It Becomes Personal

When It Comes to Your Age, Do You Share?

Confessions of a Pandemic Parent

Is it time for America to create a National Day of Mourning for gun violence victims?

Memorial Day I wrote a piece about how children’s funerals create memories that cannot be forgotten and my difficulty in finding peace in my relationship with God. Sitting in a neighborhood church the evening of September 11, 2001, feels like the last time the ritual of praying and singing in community brought calm. The day the world changed, and innocent people became the hunted of those with evil in their plans.

My final paragraph of the original work was my main message: If there is a way to create calm or comfort for those mourning in Uvalde, please let that happen. For the near future, lets put guns in the safes and do gun related political theater in backrooms. These are days to stand with the grieving and honor the children and their teachers.

Tuesday stats about gun violence across the country over Memorial Weekend were published. Wednesday a lone gunman took lives in Tulsa. And local schools cancelled their last days of school because of shooter threats. Babies being buried in one state and grieving beginning in others. The circle doesn’t close. Violent gun carriers, particularly those with assault guns, don’t give us a day off.

Perhaps it is time for America to create a National Day of Mourning for gun victims. Place the day somewhere in a quiet month like March where it won’t morph into a cookout festival. And make it a Wednesday so the travel industry won’t advertise three-day weekends in happy places. Mark the day as special by pairing it with a mandatory national service initiative. Support those who grieve and remember the potential our nation lost in each of those unnatural deaths. If there is no way to control the killing, let us at least honor our dead and remember their names.

As I settled into my seat at the movie theater and muted my phone, an unwelcome thought sneaked in, “Is going out to the movies risky behavior?” I stifled it quickly, “A crazed gunman in the old-fashioned Edina Theater? That’s silly.” Worrying about my safety at movie theaters never used to cross my mind. I resent having to consider it now.

It’s disturbing to realize so many of the ordinary things I do put me in the kinds of places where mentally ill people or terrorists choose to murder and wreak havoc. However, I have no intention of curtailing my activities.

Shopping at malls – I don’t spend much time in malls, but while there, I have never worried about my safety. However, the shoppers in the mall in St. Cloud, Minn. or near Seattle, Wash. probably didn’t give it a second thought either.

Tutoring at the high school – I love the work I do tutoring adult immigrants and have never felt remotely threatened by any of them. The students I know are hardworking and determined to learn, get better jobs, and live the American Dream. But schools and colleges have been the scene of mass shootings in recent years. Perhaps I should be worried, but I refuse to be.

Visiting international cities – I enjoy traveling overseas, but because of the history of terrorism in London, Brussels, and Paris, I will have to consider my safety in airports as well as in the cities themselves when I go. Losing my luggage or getting pickpocketed seem like more realistic threats than terrorism, but I can’t help being aware of the potential for an attack.

Often, public places happen to be the settings where a personal grudge is played out—I might not be the target—but I still could be injured or killed by a stray bullet. The issue is not that one middle class white person has to think harder about her safety. It’s that no matter who you are or where you live in America, you are at risk of mass shootings, because of our gun laws and cultural tolerance of violence.

Equally troubling is that zealots with knives, trucks, and bombs threaten people across the world, not just Americans.

Although terrorism and acts of mass violence are now part of our reality, I refuse to give in to fear. I’ve never been a daredevil, but I have no intention of giving up activities I love like movies, shopping malls, tutoring, or traveling.

Today I am in despair, afraid that Americans don’t have the courage and persistence to address gun violence. We feel horrible when another massacre happens like the one in Orlando. We deplore the murder rates and stray bullets flying around in the Twin Cities, Chicago, and other cities. Sometimes we react by going numb. Often we are cynical. Regularly we tune out the nonstop news of a massacre, because we can’t bear to listen and we feel powerless to change the situation. 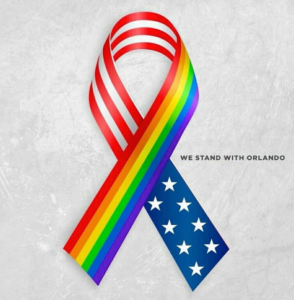 Without intending to be, we are complicit. Essentially, when ordinary Americans don’t demand change, we become accomplices to the mass murderers. We’ve provided the setting in which acts of mass murder are easy to commit. We’ve accepted that guns and violence are part of American life. We’ve allowed gunmen to kill in schools and on college campuses, in churches, movie theaters, military bases, neighborhoods, and nightclubs. No place is sacred. No one is completely safe.

I don’t know how to fix the problem of gun violence, but we have to try. Feeling bad isn’t enough.

The solutions will have to be multifaceted, because the problem is complex. Our attitudes and American culture, as well as laws, regulations, and more have to change. Common sense gun control and better support for mental illness treatment are good places to start, but the solutions need to go deeper. We need cultural change. As Americans, we need to re-examine how we think about our rights to have guns, protect ourselves, and exercise our freedoms.

I know this won’t be easy and it will take time. But we have to try.

As Americans, we have changed how we think about alcoholism and drunk driving. We look at both issues differently than we did 40 years ago. We’ve made some progress. Not enough, but some.

We’ve raised awareness and begun to change how we view child abuse, domestic violence, and rape. Obviously, we have a long way to go, but 50 years ago we were in the dark ages on these issues. In those days, many people thought that parents could discipline children as they saw fit, that a husband beating his wife was a private matter, and that women who were raped did something to cause it. Too many people still hold those views, but our culture has begun to change.

As with those social issues, gun violence will begin to change when ordinary people start having the conversations that challenge cultural assumptions and attitudes. Change will happen when our state and federal legislators hear from us and understand that we’ve had enough.

Change is possible, but we have to insist on it.