In 2012, when Elizabeth and I launched WordSisters, we weren’t sure where this adventure would take us or if we could keep up the discipline of posting once a week. Our original motivation was attracting agents and publishers, but soon we were blogging for the pleasure of writing. We had things to say and stories to share. 10 years later we’re still writing!

Through the years, more sisters in writing joined us: Cynthia and Bev are regular contributors, while Brenda, Jill, Jean and Rosemary have occasionally posted.

Our insights arise from our lives—mothering, working, aging, living through COVID, reacting to events in the news, planning our futures and setting goals. I’m proud of the breadth of topics we’ve covered and the connections we’ve made with strangers all over the world .

Most of all I’m proud of us for persisting. For being here long after many bloggers have faded away.

One of our strengths is the variety of voices, styles, and subject matter each of us brings. In that spirit, here is a collection of best-of posts. I hope you’ll enjoy sampling them.

Thank you for being our readers.

No More Guilt with Every Bite

What Work Would I Do if I Were an Immigrant?

I Didn’t Come This Far

Until It Becomes Personal

When It Comes to Your Age, Do You Share?

Confessions of a Pandemic Parent

Twenty years ago, two friends and I started the year by taking an afternoon-long New Year’s Day “nudge the universe” class. As part of the class, we and the dozen or so other participants each had to make up a name for ourselves that represented a goal we hoped to achieve. With the goal of writing a book and becoming more creative, I chose “Author Artist.”

Then, after introducing ourselves using our new names, we were tasked with writing a song that celebrated what we hoped to accomplish, as if we’d already accomplished it. With the hope of nudging into existence my goal of writing a book, here’s the song I wrote (and then, much to my dismay, had to sing to my fellow nudgers):

While I thought the exercise was silly at the time, it has turned out to be quite powerful: within a year I had a contract for What Do You Really Want? How to Set a Goal and Go for It, a book for teens that has since sold more than 50,000 copies and been translated into 10 languages.

I don’t share this to brag but to emphasize how important and powerful getting clear on our hopes and dreams can be. Even two decades later, my name and my song continue to resonate with me and, perhaps more importantly, motivate me to take action. But as we head into 2022, I’m considering a new name, a new tune and what new things I’d like to nudge into existence in the years ahead, including:

How about you? What nudges would you like to give the universe in 2022? And if you had to choose a goal-related name for yourself, what name would you choose?

Those statistics, which I came across in Voice of the Innovator, made me feel sad for my adult self who, now in her early 60s and pretty much isolated due to the pandemic, often laughs even less than that.

A few days after reading that statistic, I emailed a long-time friend I haven’t seen in years, ending my message with these words: “I hope you are doing well…healthy and happy.”

He responded immediately with one sentence: “Yes, insanely busy and insanely happy!”

That simple reply gave me pause.

Despite having read at least a dozen books on happiness and taken several happiness classes, including Berkeley’s the Science of Happiness and Yale’s The Science of Well-Being, the idea of being insanely happy had never even crossed my mind.

In fact, happiness, even at a basic level, often felt elusive. And the busier I was, the harder it was to be happy. Instead, I was stressed and anxious, and often heard myself saying, “I don’t have time to be happy now. I just need to get this done.”

Then my friend Laurie sent me a video clip of an orangutan’s reaction—one might say insanely happy reaction—to a simple magic trick in which a man makes a chestnut disappear. Watching the video made me laugh and provided me with a jolt of jolly. The first time I watched it, the 13th time and even the 21st time.

And while I’m still not laughing as often as a five-year-old, I’m definitely ha-ha-ing more often in pursuit of my new “insanely happy” goal.

Just thinking about the video makes me laugh. Perhaps it will do the same for you.

Back in 2014, I attended a lecture at the University of Minnesota’s Center for Spirituality and Healing. The speaker was Kelly McGonigal, an author and health psychologist who teaches The Science of Willpower, a popular Stanford University course.

According to McConigal, one of our biggest mistakes when making decisions is not picturing our future selves and how the decisions we make today will impact us in the years ahead.

That’s one reason why so many people put off doing things that could make a big difference in the decades to come: eating well, exercising regularly, maintaining friendships, saving for retirement and other actions that research has shown makes a big difference to quality of life as we age.

One way to set up your future self for success is by getting in touch with your hopes and dreams. I’ve been keeping a bucket list of mine for decades.

But because that list has gotten unwieldly—in large part because it now serves as a catch-all for everything from climbing Mount Kilimanjaro to taste-testing brandy Manhattans to building a cabin with my partner Steve to visiting the world’s most beautiful libraries—I also now keep an index card on which I’ve written just 10 things I want to accomplish in the next 10 years.

Even if I cross only one item off my index card every year for the next 10 years I’ll have a few accomplishments my future self will be able to look back on with pride as well as some experiences she can recall fondly.

Some years, I’ve called my future self into focus by giving her a name that had to do with one of my goals. One year, she was Author Artist. Shortly after, I signed a contract for my first book and become a real-life author.

I’m not the only one who uses names to bring the future into focus. On a recent episode of the Meditative Story podcast, music producer Larry Jackson shared a story about his work with Jennifer Hudson. On the day of their recording session, she arrived with two Pomeranians. One was named Oscar. The other Grammy. Admitting his cluelessness, Jackson asked her why she’d chosen those particular names.

Hudson’s response: “Well, I won an Oscar already and now we about to win a Grammy, ain’t we?” They did, and perhaps having two four-legged reminders of her future self-played a role in making that dream come true.

There are also other ways to call our future selves into focus. Journaling and dream boards are two common methods, but one of my favorites is by projecting yourself into the future.

One of my friend’s friends did that recently. She’s always dreamed of working for Spanx. So, one day, when in Atlanta for business, she spent an hour sitting in the Spanx lobby, picturing what it would be like one day if her future self really did work there.

Another tool that’s helped me get in touch with my future self is AgingBooth, a free face-aging app that lets you fast-forward your looks. Seeing what I might look like in 2050…when I’m 92…has helped me realize how much I’m looking forward to becoming my future self.

Will she be kinder? Still able to play 18 holes of golf. Eager to discover new authors? Finally rid of her bad habits.

What about you? How do you bring your future self into focus? 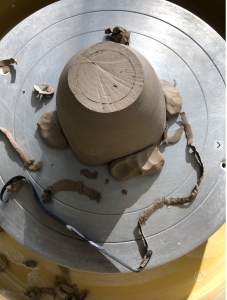 To the uninitiated, retirement sounds like a vast stretch of free time with maybe a few minor chores like laundry thrown in. Theoretically, yes.

However, all of the retirees I know are as busy—if not even busier—than we were when we worked for pay. It’s a fundamental mystery of retirement that I have so little free time. Or perhaps I should say “unscheduled” time, because really, I have nothing but free time. But I’m using a lot of it. Having fun.

Now that I can choose whatever I want to do with my time, I’m like a kid in a candy store. There are so many choices: classes, writing, travel, volunteering, two book groups and the associated reading, hanging out with friends, family get-togethers, etc. Why not set a date to make sure it all happens? As a result, I regularly confound my sons and working friends with how booked up I can be.

Here’s how a lot of conversations go:

“You want to stop by on your day off? Great! Oh, wait, I’ve got pottery class that morning.”

“Happy hour? I’d love to, but not that Wednesday—I’ve got Guthrie tickets. How about Thursday instead?”

I get that this is annoying to people who have less flexibility than I do. But if another day works equally well, I’d rather do the original activity I planned and paid for.

Of course, I’ll drop everything when something comes up:

“Can you pick me up at the clinic? I’m not supposed to drive after my outpatient procedure.”

For years, other people controlled my schedule. The magic of retirement is that now most of what I’m doing I’ve chosen to do. This time feels precious. It’s a gift—not empty hours while I’m waiting for someone to call or visit. Not too put too fine point on it, but I don’t know how much time I’ll have or how long I’ll be healthy.

I want to use my time well.