I scoffed when I read about college students becoming anxious when separated from digital technology—email, Facebook, and other social media. Or rather, I believed they became anxious, but thought smugly, Glad I’m not hooked like they are.

Except that now I am.

Recently, I was camping at a state campground that didn’t have cell signal. At all. Although we were only about 30 miles from Rochester, Minnesota, we were in the land that time and technology forgot. At first I was delighted. No New York Times news flashes or Facebook posts reminding me of depressing political news. I wasn’t expecting any urgent emails.

Being disconnected felt a bit odd, but I knew my friends would understand if I didn’t respond to their texts or emails promptly.

Not having instant access to the weather app was OK. I didn’t really need to know exactly how cold it would get at night. 55 degrees or 50 degrees—what’s the difference? Either way, we’d have a fire and then burrow into our sleeping bags at bedtime.

But what if my 90-year-old mother-in-law had a health issue? Would my sons be able to track us down? If one of our sons got seriously ill, how would they contact us? Since they’re in their 20’s, that’s usually not a big concern, but one of them had had a significant health problem a few weeks ago, so the possibility seemed more real.

You see where all this was going—good ole free floating anxiety racheted up by lack of connectivity. Wow.

Several times I had to tell myself to knock it off. Everyone was fine. Despite knowing that, I still tried to fire up my phone when we visited the park office. No signal.

For years I’ve had the constant chatter: texts, email, and commentary from Facebook, Twitter, and blogs, so it took a while to get used to the sound of my own thoughts. Or no thoughts whatsoever.

At first I had to concentrate on being in the moment. Resist the urge to curate my experiences. Just live them. I noticed the lavender and white phlox blooming in the meadow we were hiking through, heard the wind in the trees and the creek murmuring behind our campsite, and squinted at the zillions of stars you can see out in the country.

I hate admitting that being disconnected made me anxious. But instant access has become too gratifying. The more I’ve gotten used to it, the more I want it. When I hear the ding of a new email or text hitting my phone, I’ve got to know who it’s from. It’s obsessive. As reinforcing as treats would be to Pavlov’s dogs. 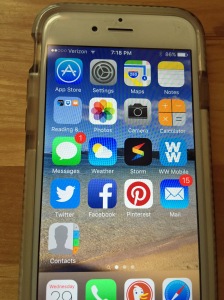 Technology is supposed to be a helpful tool, subservient to me, not my master. I don’t want to feel so controlled by it.

How did I get to be at the beck and call of this device? I let the lure of instant access get to me.

So I’ve decided to try disconnecting intentionally one day a week, as an experiment.

On those days, I’ll use my phone for calls, but otherwise avoid checking emails, weather apps, maps, Facebook, Snapchat, and the New York Times news feed. Fasting from email, apps, and social media will be hard—after all, the first thing I did after we packed up and drove away was check email. 56 of them had piled up in three days. Most of them weren’t that important, which reinforces my decision to go offline periodically.

It’s so easy to be caught up in the bizzyness of the internet and social media. I want to rediscover what else I can do with my time.

My youngest son and I were talking about eating alone in restaurants, when I flashed back to life before cell phones, tablets, GPS and Internet connectivity. He’s a nice guy, so he didn’t tease me about my “Why in my day, Sonny, we used to . . .” moment. Electronic devices have profoundly changed the outcome of several awkward or frustrating experiences.

While traveling for business in the late 1980’s, I faced a dilemma that no longer exists: how to eat alone in a restaurant without looking weird or attracting unwanted attention.

Articles for career women advised bringing a book and reading at dinner. That way you wouldn’t feel stupid, and you wouldn’t attract sleazy guys trying to pick you up. Or you could order room service and avoid the whole issue.

I usually preferred a good meal with a glass of wine to a dry turkey sandwich in my room, so I learned to carry a book. Wait staffs’ reactions and service varied from dismissive to sympathetic. To boost my confidence and convey that I had a right to be there, I was pleasant but a bit aloof. While waiting for my order I sipped my wine and read. Usually that worked, but sometimes I didn’t have the energy for the performance.

Now I can take my smartphone or tablet and catch up on email, check Facebook, read online, or write and be legitimately busy and content. I don’t have to worry that I look pathetic or vulnerable.

Before cell phones, bad luck could ruin a rendezvous. Imagine this: you’re in Chicago on business. You have a free afternoon before your flight and want to see a college friend. You agree to meet by the lions in front of the Art Institute at 1:00. By 1:15, you’re checking your watch and wondering. At 1:35, you’re frustrated and uncertain. Stay? Go? What’s going on?!? 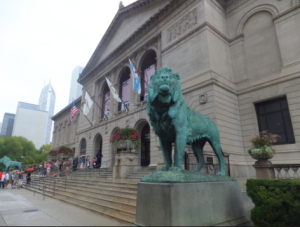 There was no way for your friend to call or text to say, “Missed my train. Can I meet you inside by the Chagall window at 2:00 instead?” You could go inside alone but she’d have no idea where to find you. Or you could leave, angry and disappointed. Either way, you would have missed each other. The afternoon of laughs and reminiscing couldn’t be salvaged. 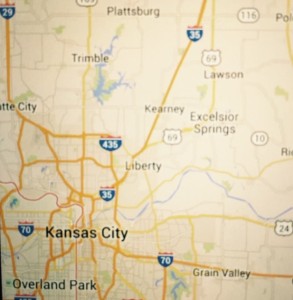 For years, I’ve driven cross-country for family visits to Ohio or vacations in Virginia, Texas, and Montana. I also think nothing of driving to a distant suburb to meet friends for dinner. Usually I navigate these trips successfully . . . as long as I have a map or Garmin for GPS.

Occasionally, though, I’ve gotten spectacularly lost. Driving 30 miles out my way near Green Bay, Wisconsin. Circling Eden Prairie, Minnesota for 40 minutes (and Eden Prairie isn’t that big). Hubris accounted for these mishaps. I thought I knew where I was going, so I didn’t bring a map.

Back in the day, the only solution was to stop and ask for directions. I had to hope the person was reliable and not a knucklehead who’d send me the wrong way, because he forgot to mention three important turns.

If there’s no cell phone signal (rural Montana and Wisconsin come to mind), I can be just as lost as in the old days. Google maps and GPS have definitely reduced the likelihood that I’ll get lost during a road trip, but sometimes they are wrong or incomplete. Just in case, I still carry a paper map and keep my cell phone charged up.

How about you? What difficult situation has become a thing of the past because of your electronic devices?

Today it is 71 degrees in Hastings, MN. Over my lunch hour, I can head in any direction for an uplifting three mile walk with a good chance of spotting an eagle.

The Mississippi River and the Vermillion River run parallel to one another and are separated by a 17-by-2.5-mile tract of floodplain forest.

I’m within walking distance of Vermillion Falls. A paved walking/biking trail follows the river in both directions.

Last fall during one walk I found myself at Mill Ruins at Old Mill Park and felt just like I had when I used to skip high school. Happy. The path to Old Mill Park also leads to Adams Park and Bullfrog Pond and to the rest of the 15 mile trail system that loops around town.

If I head behind the manufacturing plant where I’m a Human Resources Manager, I am in Veterans Athletic Complex and can take a right to follow a paved trail past a plowed field down a hill overlooking a valley.

Walking south takes me to Hastings Sand Coulee identified as one of the most biologically important sites in Dakota County. I came upon it all of a sudden. The 2.5 mile long coulee is a former

glacial stream valley. It is registered as a Scientific Natural Area. I walked a grass path that ended at an old cemetery that sits on top of the western bluff. 69 bird species have been recorded at this site.

Recently I started using Runkeeper during my walks. Runkeeper is a free app for your iphone that 28 million people are already using. Track your runs, walks, bike rides, hikes and more using the GPS in your iPhone.

I like the Runkeeper so much – It’s so EASY, so I’ve been using that instead of the pedometer I’m in charge of introducing to our employees next Monday.

Whatever your activity is today – Get Out and Enjoy.