The father of my best friend Robin owned a tool business franchise which provided two young girls with opportunities to fill bins in his wonderful red truck, to bake cookies he could share with customers, and access to dozens of interesting empty boxes.

Robin attended 95thStreet School and I went to parochial school, but we had matching pencil boxes in our desks. Most kids found a source for cigar boxes, but we had decorated paper boxes not needed in his truck into unique containers with compartments for pencils, color pencils, scissors and such. We didn’t know each other’s school friends, but we shared something deeper: hours of playing with Barbie, Midge, Skipper and Ken in wonderful houses, stores, airplanes and schools constructed out of even more empty boxes.

When the weather was cold, Robin’s basement became a town for an afternoon of play. Her Barbie had a flight attendant outfit, mine had a tailored suit. We shared a plastic pseudo-Barbie car that took one to the airport and the other to an imaginary office. Neither of us knew anyone who worked in an office or flew on planes so eventually the story turned back to all the dolls sitting at little box desks with one Barbie, attired in a skirt and sweater, called teacher.

Robin had an older sister and we both had moms so we knew real women weren’t built like our Barbie crew, but we didn’t know flight attendants, nurses, doctors, brides, or girls who wore wonderful ballgowns. Our parents didn’t buy us Barbie’s plastic house or bedroom furniture, but Robin’s dad shared tape and scissors and boxes to build furniture and a variety of workshop towels to make blankets. We stood next to him in his wood working shop as he made small frames and blocks that could extend our Barbie furniture building. We learned how to sand.

Our Barbie phase lasted less than a year, a simple time when we creatively explored, built and did what kids are supposed to do. Parents helped feed our play then stepped back. And we did okay. And I wish I could say thanks to Robin’s father and all the other parents who stepped out over the years with camping trips or garden planting or an evening at the opera to expand the world beyond the girl toys of Barbie and her crew. And those who do that today as  they parent another generation of kids. 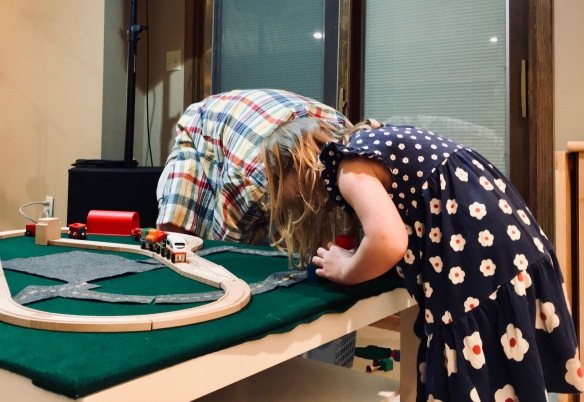