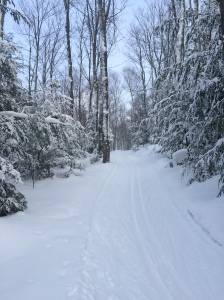 I pointed my cross country skis toward the 3.2 km green striding trail. What’s that …. about 1 ½ miles? I could do that.

If only I wouldn’t have missed my turn. At each intersection you need to stop, look and think. I did but I still went straight on Memory Lane instead of turning left to stay on Hemlock Trail.

Hemlock Trail was certainly beautiful with the pines, their branches cradling snow.

Memory Lane was a straight path to the evening before.

Last night it was dark outside Indian Mountainhead Resort main lodge. A sharp cold. Not cold enough that I couldn’t stop, gaze at the brilliant stars and marvel at the wonder. I filled with gratitude for this great universe of ours and my life.

I have a good life.

I had just left my 12-year old son in the swimming pool without even saying goodbye. He was with other Boy Scouts. Generally, Antonio and I bob heads, nod in acknowledgement to each other, or say a few words before I leave him. This time I didn’t. Not because I couldn’t see him in the fog that rose above the swimming pool, but because it wasn’t needed.

This was a first.

There was no signpost saying RITE OF PASSAGE. No moment of THIS IS IT. 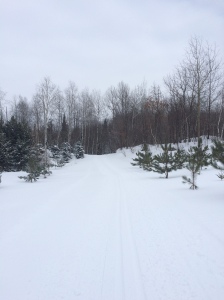 The entire weekend was like that. He was independent of his two moms and sister.

He chose to be with the group of boys even though we were an arm’s length away.

When I told a parent about this later, she mentioned that it was a bittersweet moment.

It didn’t feel bitter. There was no sadness. I used to be afraid Antonio would never leave my lap and that kids would make fun of him. Instead of pushing him off because that certainly didn’t feel right, I learned to enjoy his closeness.

When I reached the River House, I knew I was on the wrong trail. I turned around and went back to the intersection and took a right onto Hemlock.

Jody was already waiting for me in the warming cabin. She had gone further and faster than me. That’s not unusual.

The next day, I planned to ski Hemlock Trail again. And this time, I would know the signposts.