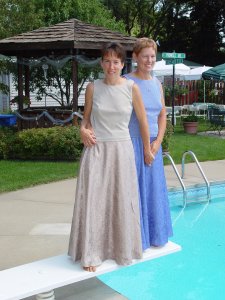 I imagine someone at school saying that to Antonio and Crystel and them responding, “Huh?”

As far as they are concerned, we are already married, and Crystel, much to her chagrin, wasn’t a part of the wedding that we had before she and Antonio came home from Guatemala. She can hardly believe that we had a life before them.

Our wedding was 11 years ago this August. Some folks would ask us, “Is it legal?”

It was to us. Still we had our personal wills drawn up. We weren’t leaving our children, our money, or our belongings to chance.

Jody and I aren’t political or activists. We live our life the best that we can and hope that people will figure out that we are pretty normal. I think we have the neighbors convinced. We hold the yearly Neighborhood Night Out gathering in our backyard. We have come to think of them as normal, too. That’s what sharing a pan of brownies will do.

Since she was the one who asked me to marry her eleven years ago, I figured I better man up.

I didn’t hear from her for a while and wondered if she was re-evaluating our relationship.

But then came the “Yes!”

Later with Antonio and Crystel around the dining room table, I said, “You know a law passed and your moms can get married now.”

Antonio said, “Yeah, I know what that is. It’s the … what’s that called … same …” He was stumbling on the word “sex” and I came to his rescue. “That’s right,” I said. “It means two moms and two dads can get married.”

“I asked Mama Jody to marry me and what do you think she said?”

Crystel laughed leaned conspiratorially over to Jody and said, “She said, “No.” If drama is to be had, Crystel is there.

“No, I did not,” Jody said, “I said “Yes.” Crystel you can be our flower girl. You always wanted to be a flower girl in a wedding.”

In one year, twelve years from the date of our first wedding, we will be married again. This gives us plenty of time to work out the details. Save the date.